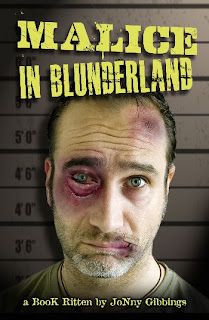 if im gunna write a review of this book im gunna do it write. first tings first, some of the writing is going to bother u. thats the only distraction i had in the book. Its not written with perfect english, grammer, etc,. Okay... I can't do that anymore. :-)

The book is awesome. It reminded me a lot of Snatch for some reason, maybe because of the characters and the locale. The main character gets pretty much just thrown into traffic, figuratively speaking, and is on a mission to get his name cleared. I mean, once you've been mistaken for being a serial rapist, been beaten up, and I don't even want to talk about the sex with the wheelchair bound woman, you're going to have a story that a lot of people want to read.

Not only is the book a delight, had me laughing out loud throughout the whole thing, but the guy who wrote it is NOTHING like the guy in the book (other than some of his grammar, but that's excusable). He's a huge supporter of the literary arts and a fantastic writer.

Go read his interview here, his blog here, and his book here...now.

As a special side note, the best review of Malice in Blunderland on Amazon is, "This is the most sick book i have ever read . Please do you know any book like this one ?" I just think it's perfect. Thank you, dablin! :-) 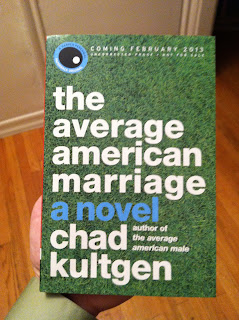 When I interviewed Chad, back in January, here, I said that, "he's one of the first honest voices of men in their late twenties/early thirties." Well, now he's going a little older, a little darker, and somehow, a little more honest (I honestly didn't think that was possible after reading The Average American Male).

Chad paints a picture here that a lot of people know is true, but never want to admit. He says what we all want to say, but don't want to believe. He shows you in this two-hundred some pages what it's like to be married, have kids, and keep moving forward in a life, even if it's not exactly how you pictured it. Don't get me wrong, he's going to bring the humor, you're going to laugh a lot throughout the book, but this one isn't going to let you limp away when you're done, you'll be crawling.

I guess the thought I have after reading the novel, and his acknowledgements page, is that marriage and kids aren't on the list of priorities for Mr. Kultgen... and that's okay. He gives us an honest and brutal view of what life could become if we let it.

Go pick up his other books now and when this one hits in February, it'll be a fun break from whatever life you lead. Before or after kids and marriage.
at 1:17 PM No comments:

If Chuck Palahniuk was a teenage girl, I'm pretty sure his name would have been Dora. That's the only Chuck reference I'm going to do here, because Lidia stands all on her own in this phenomenal new novel. If you're looking for a book that has completely captured what it is to write with a strong voice, Dora: A Headcase is your book. She knocks it out of the park with this one.

When I read her first book of short stories, The Chronology of Water, I was knocked on my ass. The first story in the collection made me cry and from there, it was a roller-coaster (man, do I hate cliche's) of emotion. In all honesty, I was expecting another book like that. I didn't read up on what Dora was about, I didn't read the synopsis, and I was almost nervous to start it, because at the time, I wanted to read a happy-go-lucky book. Guess what, I got it! Kinda.

This bad boy girl, is told from Dora/Ida's point of view, as a teenager, who likes drinking, drugs, and Obsidian (go read it, you'll understand). There's violence, a tip of the hat to Sigmund Freud, over-the-counter drugs, drinking, chicks, and an artsy video about a penis that I don't ever want to think about again. It's about divorce, love, loyalty, doctor/patient relationships, friendship, and redemption. It's a ridiculously easy read and when it's over, you're relieved and a little sad that it's over.

Go pick up the book, thank Lidia, and then tell all of your friends!

If you loved Breathers: A Zombie's Lament, you're going to love this one. It's written with the same fast wit and imagery that we've grown accustomed to with S.G. Browne's work and I couldn't be happier having the chance to read it before the release date on October 30th, 2012.

We start off the story with Andy, in a zombie research facility in Portland, Oregon. He was the leader of a zombie uprising, after which a lot of new zombie laws were put into place. There's a tip of the hat to A Clockwork Orange and the Christmas movies of our past. Unlike Scott's other books, this one doesn't have the traditional love interest, but you still feel warm and fuzzy, don't worry about that!

The best part about this book is that it's truly a Christmas Story. It takes the new view on zombie's that Browne did in the past, puts the Christmas twist on it, and it still holds up. In all reality, when I first heard that he was doing this, I thought it would be a cheesy, if not cheap marketing ploy. He quickly re-affirmed exactly why I enjoy his work so much after I sat down and read the book in one sitting.

It's a quick 200 pages and if you're looking for your fill of zombies, holiday cheer, and some breathers getting what they deserve, Scott's done it again with this one. Go pre-order it, here! 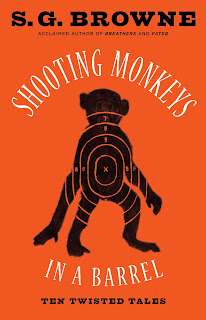 $3.99 hasn't bought me this much joy since happy meals in the 90's. If you like reading about the things we take for granted, new ways of looking at everything from luck to zombies, or wondering what it would feel like to be a shampoo bottle, this book is for you. Let's be honest, I love Scott's work. I think the guy is brilliant. I haven't had my fix in a few months, because he's between novels, so this book cured me of everything that ailed me.

It's only available through Amazon, right now, but you can purchase it for the e-readers, on most of your phones, and/or the computer program. Make it happen.

It's about 136 pages, so it will most likely be a one-sitting book, unless you want to take your time and really savour each story (I wish I did). Other than the stories themselves, my favorite part of the book is that Scott gives you a personal glimpse of where each story came from or how it came to be, after each piece. I love hearing authors secrets, it's the reason I started Mourning Goats, and this book is a gold mine!

Go read a sample and buy the book, here: http://www.amazon.com/Shooting-Monkeys-Barrel-ebook/dp/B006VG0CU0

After you've got your fill of shorts, get the novels, you won't be let down.

I'm hooked on this guy. Opened up his book, So Different Now, last night and it was finished an hour after I woke up this morning. When I first started reading this short story book, I thought that the stories sounded familiar, because a lot of them are focused around the locations and subject material from the earlier reviewed book, My Fathers House, then I read further.

This isn't a short story book, or even a linked story book, per se, it's a book about a bar named, Thirsty's. It's about seeing little vignettes of our life fly by, but no matter what, there's a location that is always 'home.' Do you have this? I'm pretty sure Ben's is Thirsty's.

In short, So Different Now is a super fast read, and it'll knock you on your ass. Every story is poignant and ridiculously well written. Like Ray Carver, Tanzer knows how to show little pieces of our life that make us who we are and crush our expectations.

#8 The Luminist by David Rocklin